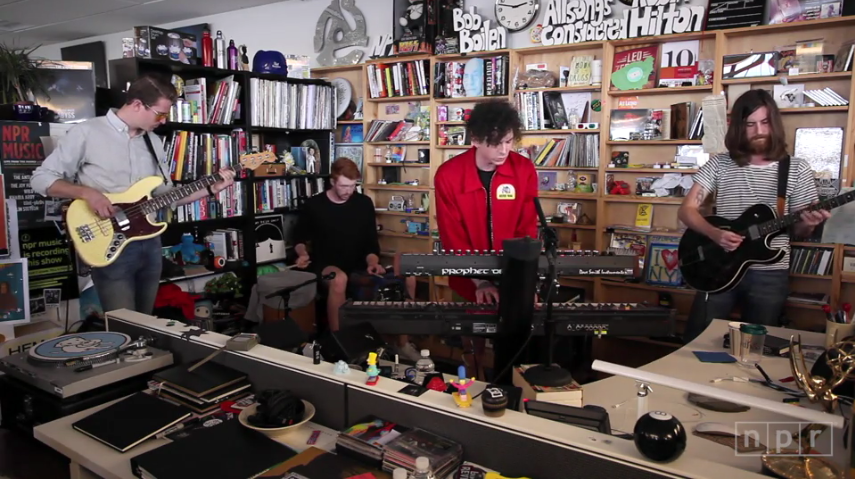 Watch the whole set over at NPR.

“Trevor Powers, the songwriter and frontman of Youth Lagoon, has never attempted to hide his navel-gazing anxieties. On his 2011 debut (The Year Of Hibernation) and its 2013 followup (Wondrous Bughouse), Powers documents a lifetime of existential crises with swirling questions about spirituality, mortality and his own mental state. Powers has also looked the part, appearing in photos and on stage wearing oversize pop-bottle glasses, with slumped shoulders and a mop of disheveled hair.

It’s a shift you can see and hear in Youth Lagoon’s Tiny Desk performance. In person, Powers is poised, appearing almost joyful at times. The glasses are gone, the hair’s under control, and his idiosyncratic voice is far less fragile, in part because he (like nearly every artist who’s graced the Tiny Desk) had to fill the room without the benefit of singing through an amp.

Youth Lagoon treated the office to two songs from the new album: the heartbreaking tale of addiction “Kerry,” as well as “Rotten Human,” a meditation on the passage of time and search for purpose in life. And, as if to give a nod to his twitchy beginnings, Powers included “July,” a wistful reflection on youth and regret from the band’s debut.”