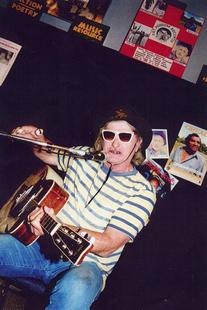 What is there to say about a small boy who heard the radio announcer introduce a song by Hank Williams and assumed that he was playing all the instruments and singing simultaneously, just as Hasil Adkins does on What the Hell Was I Thinking?

It’s hard to know, given that Hasil was living in a feudal society surrounded by but not having anything at all to do with the United States of America. He was beating on a four-gallon tin can and singing at the age of five. He progressed to a series of toy guitars and kazoos. By the late ’50s Hasil (whose store-bought sign read “One of the Greatest Shows on Earth, the One Man Band Haze Adkins and his Happy Guitar”) was playing the roughest joints in the territory, eeking out a living entertaining miners on payday.

But it was during the ’70s that Hasil developed into the artist he is today. He experimented with different names– The Haze, The Wild Man from Van, and perhaps his biggest achievement, The Hunch — and he loved to go a-Hunchin’ in the night, to catch some little waitress who knew how to Hunch that thing. Hasil was a Hunch-in-Progress: he defined it believed in it, even prayed to and for it. It loved him almost as much as he loved it. Obviously, Hasil was just as confused about what to call himself as he was who to sound like, namely Hank Williams or Jerry Lee Lewis. He loved Hank and knew he was the best, but every time he opened his mouth to sing it sounded like Jerry Lee, so go figure. It might simplify this odd situation to say that if Hasil had had a secretary during the ’70s, and if anybody had called, she would’ve said: “I’m sorry, Mr. Haze is out to Hunch. He said he’d hope to be back from hunchin’ around Dark-thirty, Dark-forty-five.”

Throughout the ’70s he released a handful of singles on several different vanity labels. While these records are hard to find, there are other records that any state trooper with a radio and a little help from the local dispatcher can access immediately from the Boone County Courthouse. This was the same era that the Hunch began Vodka. Not surprisingly, there were numerous accidents, one so bad that the car in which he was a passenger flew off a mountain and left him the sole survivor (albeit with permanent back damage). This was also the epoch in which Hasil honed his Hunch-craft, a skill that can’t be learned at just any university. There were approximately two hundred nights in which Hasil slept with three or more women during a single session. These “sessions” weren’t free by any means, and Hasil often discovered that he’d bitten off more than he really wanted to chew, like the night he found himself at the bottom of another man’s holler with a bunch of spent 12-gauge shells at his feet and his own true self yelling into the night.

Hasil’s been patiently waiting in his trailer for success to come back around, yet he’s getting a little weary of waiting. This kind of shit’s enough to make anyone cynical and disturbed. The same old thing every day– sitting on the couch wondering whether to beat off before or after “The Price is Right” or skip the damn show and just fry a pork chop, take a nap and then, if the mood was still right, beat off then. Hasil leans back and laughs, knowing that he was meant for better things.

“This whole damn trailer needs cleaning,” he yells at Igor, a black bitch with a lot of German Shepard on one side of her breeding. “I can write my name in the coal dust on the coffee table, those awful goddamn coal trucks they go all day and right through the night and they don’t stop for nothin’. Somebody needs to send another somebody (with a lot more energy than I got) to me so’s I can have them clean up this place; I’m telling you the truth, Igor.”

Truth to tell, it’s not unusual for Hasil to converse with the hound. He still is: “What’s the weirdest thing you’ve ever eaten, Igor? I’ll bet I’ve eaten something weirder than you.” He pauses and looks around the trailer. “Wish I was somewhere else, the desert or something. It would be a nice day to be driving across the desert in a good car going about as fast as you’d ever want to go. I’d probably get to run over some mean snakes.” What the Hell Was I Thinking?