Don’t call it a comeback; he’s been here for years. Underground rock hero Neil Hagerty returns with Knuckleball Express, the electrifying new album from his long running project The Howling Hex, and first for Fat Possum Records. While he may be best known as one half of the critically confounding Royal Trux, Hagerty has thrived and survived beyond many of his subterranean peers from the late 1980s by staying true to his school of eccentricity. This supercharged collection of guitar-heavy choogle proves he’s still throwing heat in unexpected directions.

Recorded over eight days in Hagerty’s home of Denver, the album finds him teamed up with a brand new musical squad. The second most prominent voice and guitar featured comes from Nicole Lawrence, who has recently been seen onstage with Mary Timony and King Tuff. Thanks to a meaty mix by veteran producer Clay Jones (Modest Mouse, Elvis Costello, Townes Van Zandt), it’s as slick as the Howling Hex has ever sounded without losing any of their off-kilter scorch.

For this 10-song set, Hagerty drew on influences from the spooky smoothness of the Atlanta Rhythm Section and psychedelic repetition of the 13th Floor Elevators. Reveling in the human qualities and inconsistencies of a real rock and roll band, the quintet recorded live off the floor, often jamming long beyond where you hear them fade out.

“Rock and roll is what’s missing in bands these days that take a generic approach to playing that’s almost machine-like,” says Hagerty. “We don’t need that anymore because machines can actually do it. I don’t see what the difference is between a precise human drummer playing to a click track and EDM. There’s some weak dad-rock stuff being distributed now by people my age, so I’m just trying to up the ante. I get on stage and say all the words I believe in my daily life. Not every dad can do that.”

Without laying out a clear ideology in his lyrics, Hagerty’s surrealist poetry paints images of goth flowers, scorpions riding go-karts, and rivers bleeding gold. After the turbulent years of Royal Trux originally came to an end in the early 2000s, he escaped Washington, D.C for the remote deserts of New Mexico before settling in the tranquil environment of Colorado. “City In The Country” might be Knuckleball Express’s most autobiographical song, as he hints at the panic and tension of his past. “It’s just another addiction now, uh huh, and that’s why I won’t be seeing you around me” he harmonizes with Lawrence, before describing his new home. “The gentle way the blades are turning out sweet Rocky Mountain waves, cascading down the blue ice to the city far away.”

The Howling Hex’s new home on Fat Possum also provided a motivation for this album’s approach. With the possibility of reaching an entirely new audience, Hagerty aimed to put his own spin on the country, blues, and gospel music that has long been a cultural fabric of the label’s home in Mississippi. This can be heard in the extended instrumental jam that closes out “Words”, the harpsichord honky-tonk of “Cowboy Motors,” or the squealing leads of closer “North Aquarian.” Even drummer Kenneth Boykins gets his chance to stretch out for a solo, but of course it comes complete with zonked electronics.

“It really comes down to making something people want to listen to without throwing it out the window,” says Hagerty. “I didn’t want this to be an album everybody feels like they need to hear because it’s so cool. I’m old enough now that I don’t have to carry the burden of appealing to snobs anymore. No one’s going to know who I am or what this is, and that’s the great thing about it. It’s the least I could do after all the fucked up shit.” 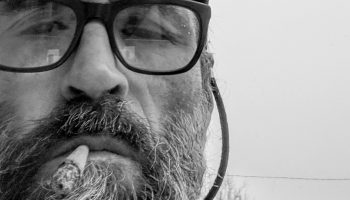