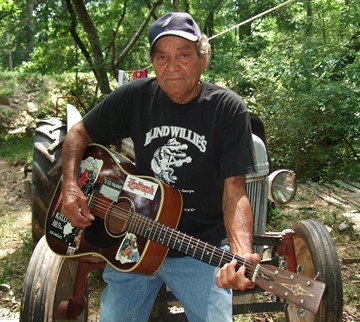 Robert Cage was born in New Orleans on April 4th 1937. A year later, his family moved to Natchez and from there to Woodville, Mississippi, a small woodsy town forgotten by time (evenby Mississippi standards). Robert’s father owned a grocery store and it was there, on the porch, where Robert heard Scott Dunbar play and sing, as well as another performer named Pig. Robert’s first guitar was a gift from his mother; it was new, from Sears and Roebuck, and had pictures of red cowboys on a white body. When Robert heard the electric sounds of John Lee Hooker, Muddy Waters, and Howlin’ Wolf, he lost interest in Scott Dunbar’s pre-war style. Robert wanted to catch up to the rest of America.

In 1958 Robert was in the house band at the State Line Club (Mississippi and Louisiana) and stayed loyal until it burned down, giving him little choice but to sign on at the Black Cat Club. In hope of earning more money, Robert went modern; he tightened up the same band, named them the Impalas, hired a saxophonist and added Sam Cooke and Chuck Berry numbers to their set lists. But the Impalas just weren’t meant to be– no matter what they added to their routine, or how many long, hard tours they made through Mississippi and Louisiana. Robert Cage weighed almost 200 pounds when he started the Impalas and at quitting time weighed in at less than 100. Thank you very much, whiskey.

In 1970 Robert married Minnie and began full-time work as a diesel mechanic. Robert continued gigging at local parties with an occasional club date. It was the constant hassle of finding good bands that turned Robert into a solo performer and back to the style he first learned, Scott Dunbar’s style, the way he plays today. Robert, though not excited about it, tours occasionally. Can See What You're Doing