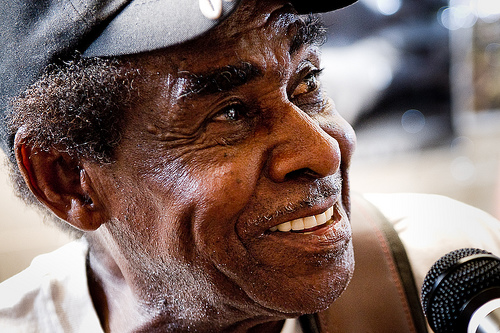 T-Model’s credentials are impeccable; if anything he’s over qualified. He was born James Lewis Carter Ford in Forrest, a small community in Scott County, Mississippi. T-Model thinks he’s seventy-five but isn’t sure. He was plowing a field behind a mule on his family’s farm by age eleven, and in his early teens he secured a job at a local sawmill. He excelled and was later recruited by a foreman from a bigger lumber company in the Delta, near Greenville, and eventually got promoted to truck driver. Between that and working in a log camp T-Model was sentenced to ten years on a chain-gang for murder. He lucked out and was released after serving two. He says, grinning, “I could really stomp some ass back then, stomp it good. I was a-sure-enough- dangerous man.”

Well, old times here are not forgotten. T-model is constantly arguing playfully with Stella, his girlfriend, about their more violent disagreements. When asked how many times he’d been to jail, T-Model responded, “I don’t know. How many?” He seemed to think it might be a trick question. Upon realizing it wasn’t, he answered to the best of his ability. “Every Saturday night there for awhile.”

As disheartening as this is, it’s also a refreshing reminder of how ridiculous the present image of a bluesman is. Nothing could be more twisted that the romanticized and picturesque standard; and old black man devoid of anger and rage happily strumming an acoustic guitar on the back porch of his shack “in that evening sun”. Three quarters of a century old, and with a dislocated hip, T-Model Ford is the only musician making his debut who could just as easily be starring in the most competitive branch of the National Wrestling Federation: The Cage Match.

Although Fat Possum makes it it’s business to trod some wild paths, the wildest yet has to be the one that T-Models drummer, Spam, lives on. We stopped en route to New York City just as Spam’s girlfriend walked out of the door dragging an oxygen tank and holding a cigarette in her other hand-a situation that could have been easily blown out her rib cage if not the entire block. Spam didn’t care about that, though. He was worried she might snip off the tips of his fingers with a box cutter again.

Tommy Lee Miles to the authorities, Spam to his friends, he has been T-Model’s A-number-one drummer for the past eight years. Sam Carr and Frank Frost, T-Model’s old friends, were brought in for one session. But the guest musician’s smiles gave way to scowls as T-Model’s constant refrain (“T-Model Ford is going to remember you sorry fuckers how it’s done”) became more and more emphatic. Seconds before “Been a Long Time” was recorded, Frank Frost felt compelled to sate, “I want everyone to know that I’m now playing against my will.”

T-Model and Spam are the only men still playing on Greenville’s Nelson Street. Most of the audience has scattered due to violence from the crack trade, and with the exception of T-Model, the street that once boasted Booba Barnes and others is dead. On a typical night Spam and T-Model will arrive at the club and unpack T-Model’s guitar and amp, and the bass drum and snare he allows Spam to use. When T-Model feels there are enough people, they start banging away in their own post-war Peavey-powered hill stomp. It’s nothing unusual for T-Model to play eight hours a night. They keep going until no one’s left standing. After his equipment’s packed up T-Model will coat himself with Outdoorsman Off and climb into his van to crash. Don't Get Out Talkin' It Pee Wee Get My Gun She Ain't None of Your'n