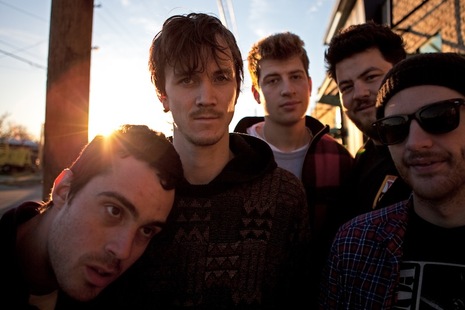 “…what separates The Felices’ mud-stomping folk from that of their peers is their no-winking honesty – the sense that these songs and the places and people they’re singing about aren’t literary devices but actual people doing their damnedest to rage against the growing darkness.” – Filter Good Music Guide, 2009

Here’s what’s already known about The Felice Brothers: they are a close-knit band of two brothers and three longtime friends, all in their twenties. They are self-taught, not one of them played an instrument prior to the band’s inception in 2006 when they started busking in New York City subway stations. The Felice Brothers have released three full-length albums; their last, Yonder Is The Clock, on Team Love Records (2009). The majority of their work was recorded in a converted chicken coop in upstate New York near their hometown of Palenville. Esquire, Filter, The New York Times, NPR, Spin, Time Out New York, Uncut, and Under The Radar have praised them, among others. They are on virtually constant tour in the States and overseas, and have performed at festivals including Bonnaroo, All Points West, Outside Lands, Langerado, and the Philadelphia Folk Festival. Recognized for their live show, The Felice Brothers will play for their audience come hell or high water; the foremost example is their transcendent performance at the 2008 Newport Folk Festival, where they soldiered on, unplugged, in the rain, and barefoot in the mud after a lightning bolt shorted their stage’s power supply.

Here’s what might come as a surprise about The Felice Brothers: their new and fourth LP Celebration, Florida is an exhilarating amalgamation of frightening horn sections, unexpected 808s, ambient synth lines, schoolyard taunts, booming, primitive drum beats, heavy bass lines, piano, violin, accordion, ringing guitars, rave beats, and sinister acid jazz that captivates and mystifies. Recorded in the library and theater of Beacon, NY’s old high school, the band explores a multitude of sounds and instrumentation throughout the expansive album. It’s inspired, imaginative, heady, menacing, passionate, and rollicking. Most importantly, it’s as steadfastly authentic as ever, expanding upon the dark, woozy undercurrent of ramshackle barroom blues, vaudevillian atmospherics, and surreal storytelling of their previous albums. Under The Radar wrote in a review of Yonder Is The Clock that The Felice Brothers find “inspiration and freedom rather than constraints in the traditions of folk music.” Celebration, Florida revels in this inventive, outlaw spirit; it’s the sound of a band that knows its roots and knows where it’s growing. It’s a group who just might expand the definition of Americana music along the way.

Celebration, Florida casts scenes of dreamy characters and stories interwoven like a block of primetime TV. Among the tales: a young woman who sets off to find a secret paradise; a teenager who enters a boxing gym in Catskill, NY; a late night host recounting his rise to fame to his honeybee while traveling in a private jet; shady degenerates who get lost in a mystery concerning a Honda Civic; a young girl who crimps her hair and spies her dead father driving down the road; a Wall Street scandal hits a little too close to home; and even a trip through space to find long forgotten Hollywood parties and hopefully make it back there in time to walk down the red carpet.