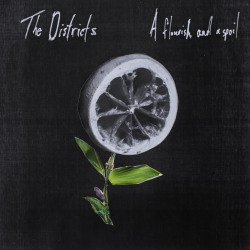 “The Districts rarely make it through an interview without the journalist remarking on the ages of the band members. They have nobody to blame but themselves, though. This is what you get when you craft a near-perfect guitar album before all the guys in your band can even legally buy a drink. Their full-length debut, A Flourish and a Spoil, produced by John Congleton (St. Vincent, Modest Mouse), runs the gamut across 10 songs: from stop-and-go rallying (“4th and Roebling” ) and fuzzed-out melodies (“Peaches”) to lo-fi acoustics (“6 AM”) and a sprawling jam (“Young Blood”) – each song its own animal but of the same genus and roaming together instinctively. Much of the album deals with the frustrations of growing up in a small town, which frontman Rob Grote lays bare on “Suburban Smell”. With only an acoustic guitar and the palpable weariness in Grote’s voice, we are left feeling all the disgust, defiance, and desperation of a young man who refuses to fall into a life that’s beneath him. How old are these guys again? Remarkable.”
– Matt Melis (Consequence of Sound)