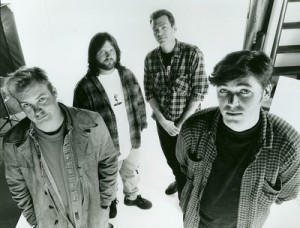 Fat Possum Records are happy to announce that they are making two classic Grifters albums available again. The reissues of 1993’s ‘One Sock Missing‘ and 1994’s ‘Crappin You Negative‘ will be released August 12th, with the digital versions available now!

Following a highly praised, last minute hometown reunion show in November 2013, Memphis rockers the Grifters returned to the scene in a more regular fashion in 2014 starting with two shows in New York celebrating the 20th anniversary of the band’s 1994 breakout album ‘Crappin You Negative,’ which received worldwide praise upon its release including a 4-star review from Rolling Stone. Since then, they’ve performed at the Tomorrow Knows Fest in Chicago, RalphFest in Orlando, Birmingham AL’s Sloss Fest, and favorite club haunts along the way.

“After playing Memphis, we’ve gotten plenty of calls from old friends asking us to come to Chicago or Columbus or Philly or Atlanta,” says bassist Tripp Lamkins. “Though we’re not able to hit the road as readily as we used to, we do want to go back to all those places as soon as we can.”

Originally coming together in 1990, the Grifters—Stan Gallimore (drums), Tripp Lamkins (bass), Dave Shouse (vocals, guitar) and Scott Taylor (vocals, guitar)—spent much of the following decade releasing four full length albums (two for Memphis-based Shangri-La Records and two for Sub Pop) and touring the US and the world with bands such as Flaming Lips, Fugazi, Pavement, Guided by Voices, Jeff Buckley, Red Red Meat and many others.

After a 1994 show at CBGB, The New York Times praised the band’s electrifying live performance saying “Beneath the fuzz and the clatter, the secrets of the band’s underground allure lay intact. The guitars were dipped deep in the blues tradition of their hometown and the rhythm section often took detours into jazz. Mr. Shouse had a sixth sense for pop melody that made the audience work to retrieve the perfect pop pearl that lay inside cracked new rockers.”