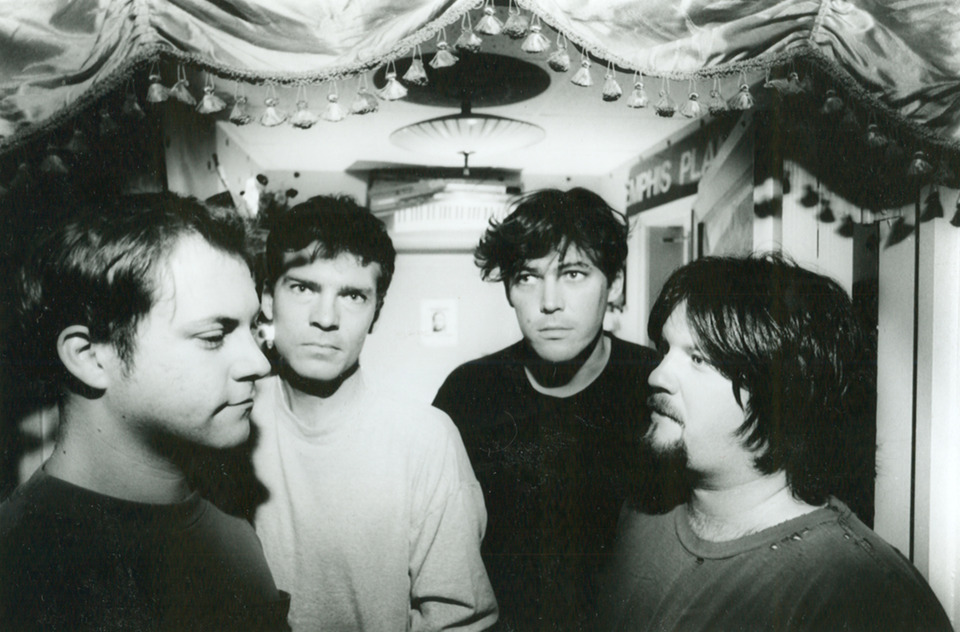 Today, we see the re-release of Grifters classic albums “One Sock Missing” & “Crappin’ You Negative”. Got an email yesterday from Mik Davis at T-Bones Records & Cafe in Hattiesburg, MS that sums up why we’re releasing these records. Order here, and Read on below:
—
There is a book where people recount the best shows they ever saw. The list is voluminous and hits on culturally important shows, the shows where a band moved from obscurity to lines around the block, the shows where an exhausted band found somewhere within their skulls and hearts the means to excite an enthusiast crowd (or a non-existent one). The show that tops my list was The Flaming Lips/The Grifters/Codeine in Baton Rouge, LA in 1993. That middle band I am fortunate enough to say occupies all of aforementioned descriptions on my truncated list.

At that show (at the Varsity in Baton Rouge), I saw the Grifters knowing that they were the middle band, the dreaded red headed step child of the bunch literally pull out all of the stops in their 40 minute set. Like all good musical memories, the rest is like a fever dream. Codeine (who I loved as well) never raised their tempo above let’s say 16 bpm. So, needless to say, everyone of the 200 people in this club were not just ready to rock – but they *needed* it more than anything else.

The Grifters came out looking no different than the roadies for the bands circulating the bar behind me, or even the crowd members that surrounded me. What happened when they picked up their instruments remains a mystery to this day. The drummer pounded as if possessed and the band members walked around the stage like drunken marionettes each with a couple of broken strings. However, the songs I had previously heard on “One Sock Missing” – sprung to life. Without the walls of noise and 4-track random trickery, these tracks either fast or slow allowed everyone to lurch, bounce, even just nod along in rhythm. And then, bassist Tripp Lamkins threw his axe on the ground and began hopping around on the neck with lunacy of a jailed 4-year old just manumitted from a handful of time outs.

One year later, I am one of nine friends crammed into the proverbial band van (nicknamed The Mongoose by a great man named Fish…but that’s another story.) The ride to Oxford was long and hot. Nine 60-watt bulbs bouncing around for a 5 hour long ride had everyone of us shoot out of the Mongoose like pinballs. All along, knowing that four of us were about to open for this band that we saw just one year ago. Over that long summer (I’m not saying “hot” again because *all* summers are scorchers down here), we had the good fortune to imbibe “Crappin’ You Negative” and were completely floored. Rabidly waiting for this show, I don’t even remember what or how we played that fateful night.

The Grifters were far different however from the swarming chaos of 1993. Their songs had taken shape, and those shapes were these shambolic, visceral cuts that made you bang your head *and* stagger around like a punch drunk boxer who stayed in the ring one round too long. “Rats” was a rager that night, even if the specimen at the bar grazing on peanuts did not bother to look away from the giant TV screen. Behold! “Cinnamon” purred along like a serpentine cat. All Neil Young atmosphere on one hand and a new brooding undertone emerging on the other. Somewhere between the flowing cornucopia of blinding riffs, perilous leaps from idea to idea within these songs that bared no immediate comparison to anyone or anything I had previously experienced; I lost myself in the crowd that socialized without wit and was drowned in their dumb guffaws and failure to elucidate any sentence without the use of “like” or the word “man” uttered with the uncool of Thurston Howell III from upper lips stiffer than the Oxford cloth shirt collar just inches below.

Then, they roped me back in, saved me from this death by obliviousness. As the show ended, I sensed they did not want to quit playing. The now nameless songs were like badges of honor from long gone daze. All the stories I heard began to make sense, this was a band of outlaws. The kind of outlaws not allowed to even set foot on the streets of this town in the light of day. The outlaws immortalized in Blue Mountain’s “A Band Called Bud.” A song whose simple refrain “ridin’ around in a beat-up van smokin’ marijuana just like any another band” was the history they were valiantly reaching to put *behind* them. There was no big conclusion. No joyful flourish to end the show like Baton Rouge. This was the first flight as the chrysalis sheds its entire old body to become a completely new creation. Their next show, wherever it would be, would be the show where they took that true first flight.

POST SCRIPT:
We finally got up the nerve to talk to the Grifters. They were so nice and completely unassuming. It’s all a haze to me, but I have one very distinct memory.

This doorman had left his post and was hassling this short, cute, Mississippi girl. The kind of girl that dresses elegantly but simply doesn’t know it. Even though the bar is filled with smoke and the crowd has been circulating like whirling dervishes. She showed none of the wear from the event. Anyway, he is really starting to lean on her, using their height differential to his advantage. I am talking to Tripp Lamkins about eight feet away. Distracted by this damsel in potential distress, he breaks our conversation to say “Hmm, looks like we might get in a FIGHT tonight.” I nod.